How to Design a Mid-Century Modern Home

We can’t talk about mid-century modern interior design without bringing the name of Frank Lloyd Wright into the mix. A designer who focused on wide, low footprints and eccentric, open windows, the mid-century modern home brings the simplistic yet unconventional nature of the outside world inside.

Wright focused on styling homes for the traditional American family and revolutionized what a home could be. Clean designs with pops of vibrance and a focus on bringing families into one room is the heart of mid-century modern style.

But what are the ins-and-outs of mid-century modern design, and how do you achieve it? Our experts at Colder’s will give you all the answers in this style guide.

What is Mid-Century Modern Design?

What is Mid-Century Modern Design?

Clean lines and fun, asymmetrical shapes have made their comeback. What started as a trend in post-WWII America has circled back to a modern style. So, should we call it Mid-Century Re-Modern?

The beautiful architecture of Mid-Century Modern design was intentionally crafted to allow for flowing spaces between rooms and open concept floor plans. Functional, raised wooden furniture pieces are a staple for this design. Raised furniture pieces emphasize the feeling of more air and space in each room. Clean lines, functionality, and modesty were the basis of this gorgeous mid-20th century interior design.

Mid-Century Modern interior design rejects frills and ornate styles such as flowered couches or decadent chandeliers. The idea began with a rebellion of the centuries before them, where style mainly revolved around tradition and heritage. The rejection of frill and lavish pieces holds this interior design together.

It began at the end of WWII. The world was suffering, picking up the pieces of a chaotic and economically draining period. The design world quickly began to cope through straight-edge lines and family rooms designed to draw people together.

Minimalist Lines: By bringing the eyes to the room’s focal point via delicate lines, the mid-century modern architect blended modesty with unique styles. Minimalistic lines are a clever way to pull the focus of your guests to where the true artistry lies, outside. A subtle yet useful piece is this Linon Charlotte Bookcase. The lines are skillfully pointing upward. Place it near a window, and the eye will be directed towards the sky.

Asymmetrical Patterns & Shapes: The true mid-century modernist was never afraid to put a little funk and style into their home while keeping to functionality and sleek lines. Soft curves and patterns will keep your home feeling stylish and your space uncluttered. This clean sandstone mid-century modern chair fits perfectly into mid-century modern furniture style. 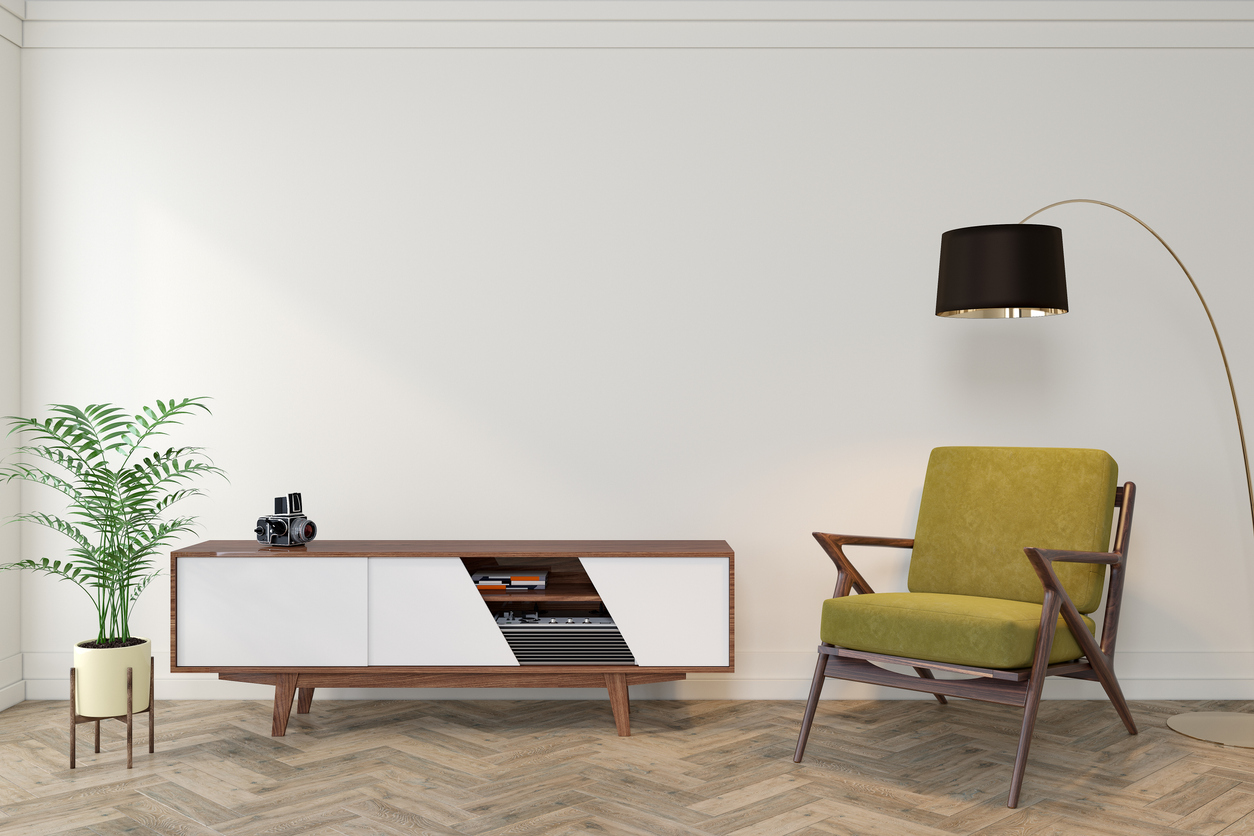 Earthy colors: Many of the rich and famous at the time swept their families away to coastal towns during summers. Their hideaway havens were bungalows. Most of these artistically gorgeous harbors held various degrees of earth tones. A crafted bungalow brown mid-century modern bed could easily be used to pull the soft comforts of the outdoors in like a traditional bungalow always did.

Vibrant, highly saturated colors: Having a home filled only with earthy tones may get you closer to transitional interior design than you may want to. A bright-red backsplash in your kitchen quickly draws attention to its vibrance while not pulling attention away from your design. Or this rusted mid-century modern sofa from Ashley Design is a keen way to add that pop of color to your living room. 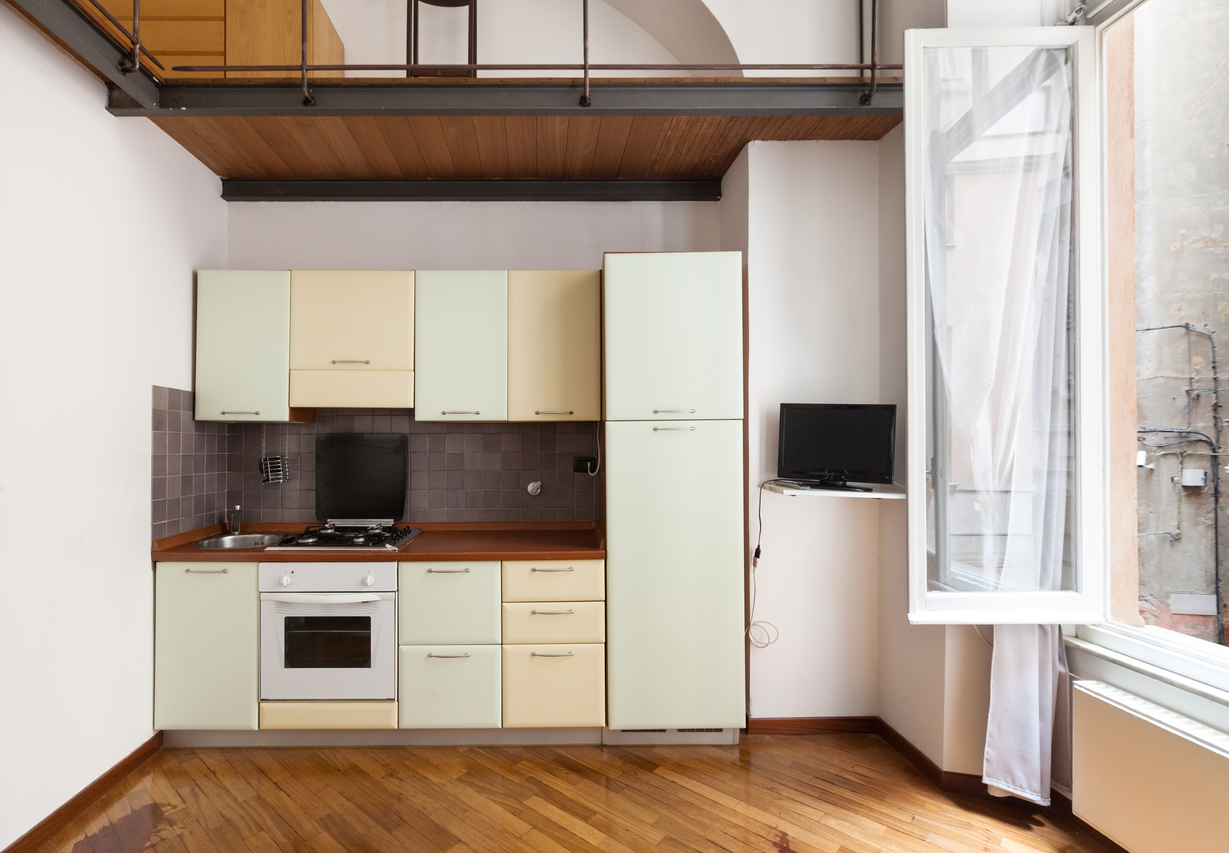 Natural woods & stones: We could never forget the importance of natural woods and stones. The popularity of teak, at the time, was used for the rich colors it brings and its durability. Fill your home with stone backsplashes and furniture that’s functional and natural.

A Mid-Century Modern Living Room: If you were to build a mid-century modern home, the focus would be almost entirely on the living room (and the kitchen). The idea is they give adequate space for the places where family and friends could spend most of the time in. So, without neglecting the key characteristics of mid-century modern furniture, an optimal choice for a couch would be this velvet blue mid-century modern sofa. It boasts vibrancy while holding to those soft shapes and lines.

A Mid-Century Modern Bedroom: To trickle this style right into the bedroom, look for pieces with richer woods and elevated furniture. This walnut mid-century modern dresser's features hold true to darker and richer colors. The length of the mirror blends functionality and artistic design into one to bring that lighter, airy feel. 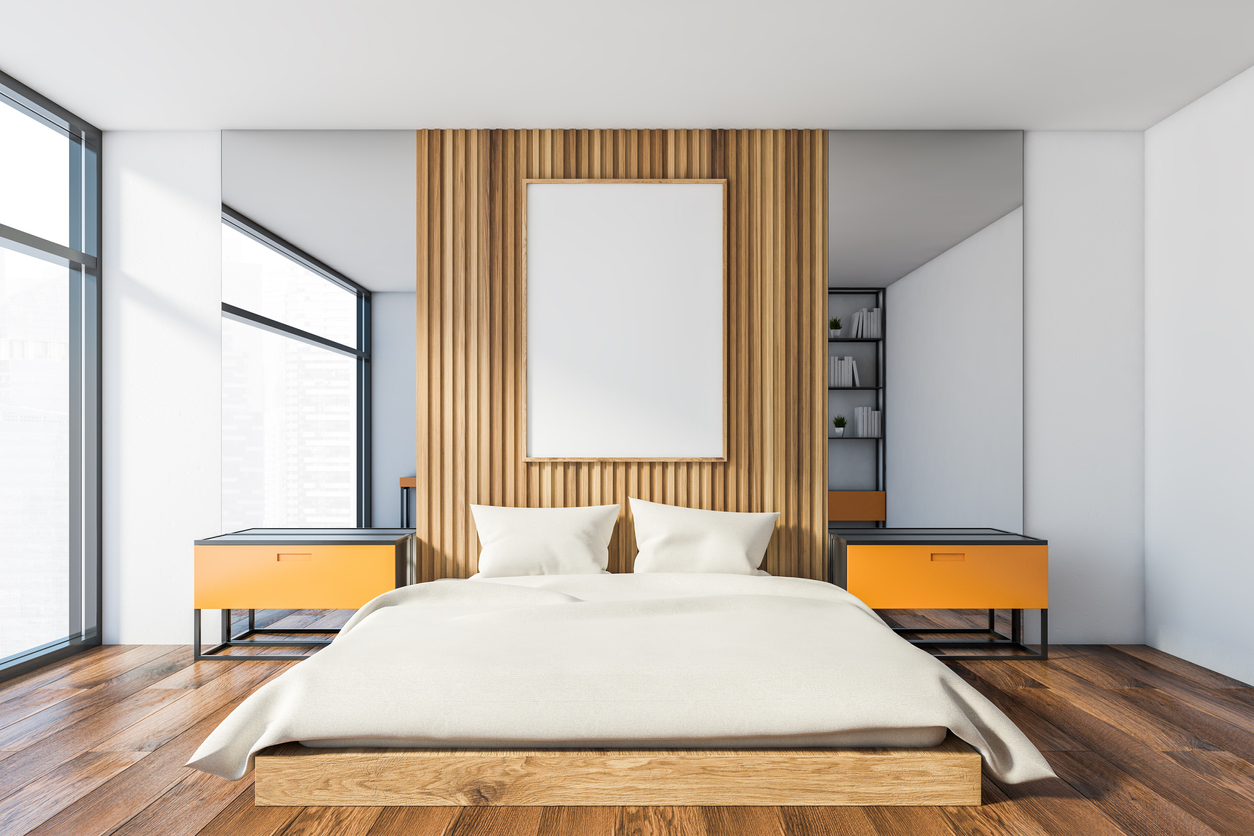 A few décor styles meet the same characteristics of mid-century modern interior design. They can pair well together if done with delicate craft, or they stand alone confidently in a class of their own.

Art Deco vs Mid-Century Modern: Opulent designs and metallic accents embody art deco characteristics. In a debate of art deco versus mid-century modern designs, there are a few similarities. Both hold tightly to clean lines and shapes. However, art deco strays from mid-century modern. Its use of shapes sticks to more symmetrical patterns to create glamour and sophistication rather than a more earthy simplicity. This gold abstract art deco canvas is lavish with metallic colors that shine through.

Mid-Century vs Mid-Century Modern: These two styles have many similarities, but mid-century versus mid-century modern designs do have some differences as well. Based on their specific eras, post-depression and post-WWII, you can understand why they boast what they do. Mid-Century originated in the 1930s and holds true to muted colors and no-nonsense elements. Vibrant and geometrical styles came years later when the American people wanted more individuality. All that to say, the mid-century interior design is beautifully functional. This beige mid-century sofa perfectly fits a functional piece that exhibits muted colors.

If you’d like to check out more interior design ideas, take a look at 5 Trends That Will Elevate Your Living Room Style for 2021 on our Colder’s blog.

Shop at Colder’s For Your Mid-Century Modern Inspiration

Our experts at Colder’s are 1950s experts on mid-century modern interior design. Colder’s prides itself on offering service, selections, and value. From the beginning, we’ve been serving customer care and local satisfaction to everyone who comes to shop our collection.

Shop local at your nearest Colder’s store! Come by one of our four Southeastern Wisconsin locations or browse our catalog to find the best mid-century modern ideas for your décor. Don’t hesitate to give us a call at 1-414-476-1574 with any questions or concerns.  We’re now more accessible than ever and can be reached via chat!