To the joy of home cooks everywhere, premium kitchen brands have brought restaurant-caliber cooking technology to households, with recent innovations resulting in more evenly cooked meals being served to the table quicker than ever.

Convection and Air Fry ranges and wall ovens have upped the ante on how efficiently we can prepare our foods both in terms of how the cooking fuel is channeled and how fast we can serve up our favorite foods to our hungry patrons (a.k.a., our family members).

What is Air Fry? 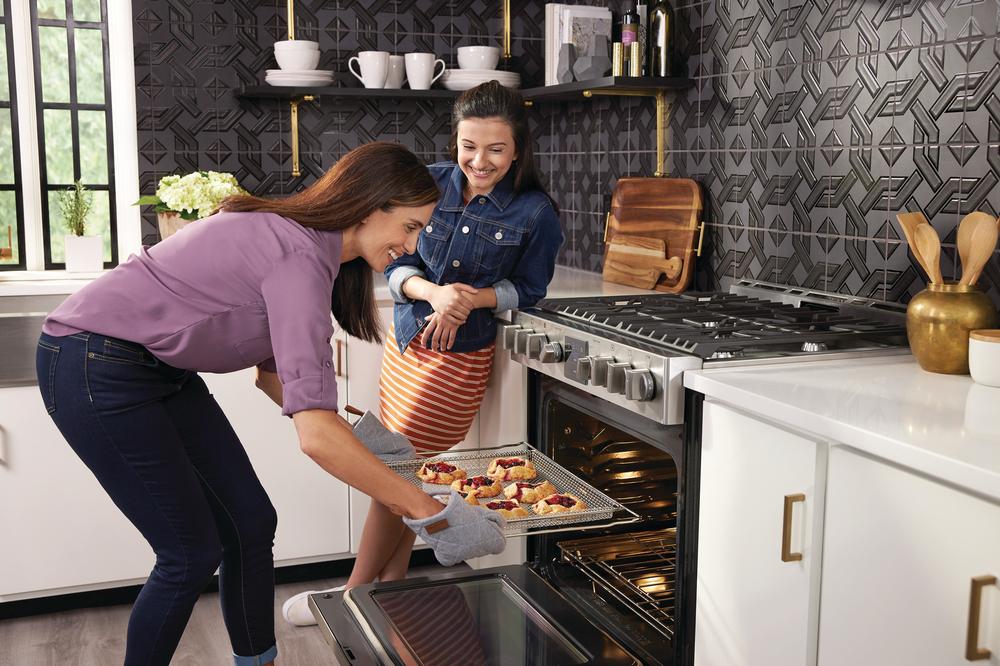 Air Fry… What is It?

Available as an option in select ranges and wall ovens, the Air Fry setting replaces the need for a countertop air fryer or deep fryer. Air Fry ovens use convection fans to rapidly circulate extremely hot air around your fried favorites, resulting in evenly cooked foods with a crispy, golden exterior.

Powered at the touch of a button on all models available in the market currently (including the famed Air Fry ranges from Frigidaire Gallery), many ovens with Air Fry don’t require you to preheat your oven. To use this cooking mode, just place your tray of food on the rack, press the Air Fry button on your oven’s control panel, set the appropriate temperature between 350 and 500 degrees, and select “Start.” 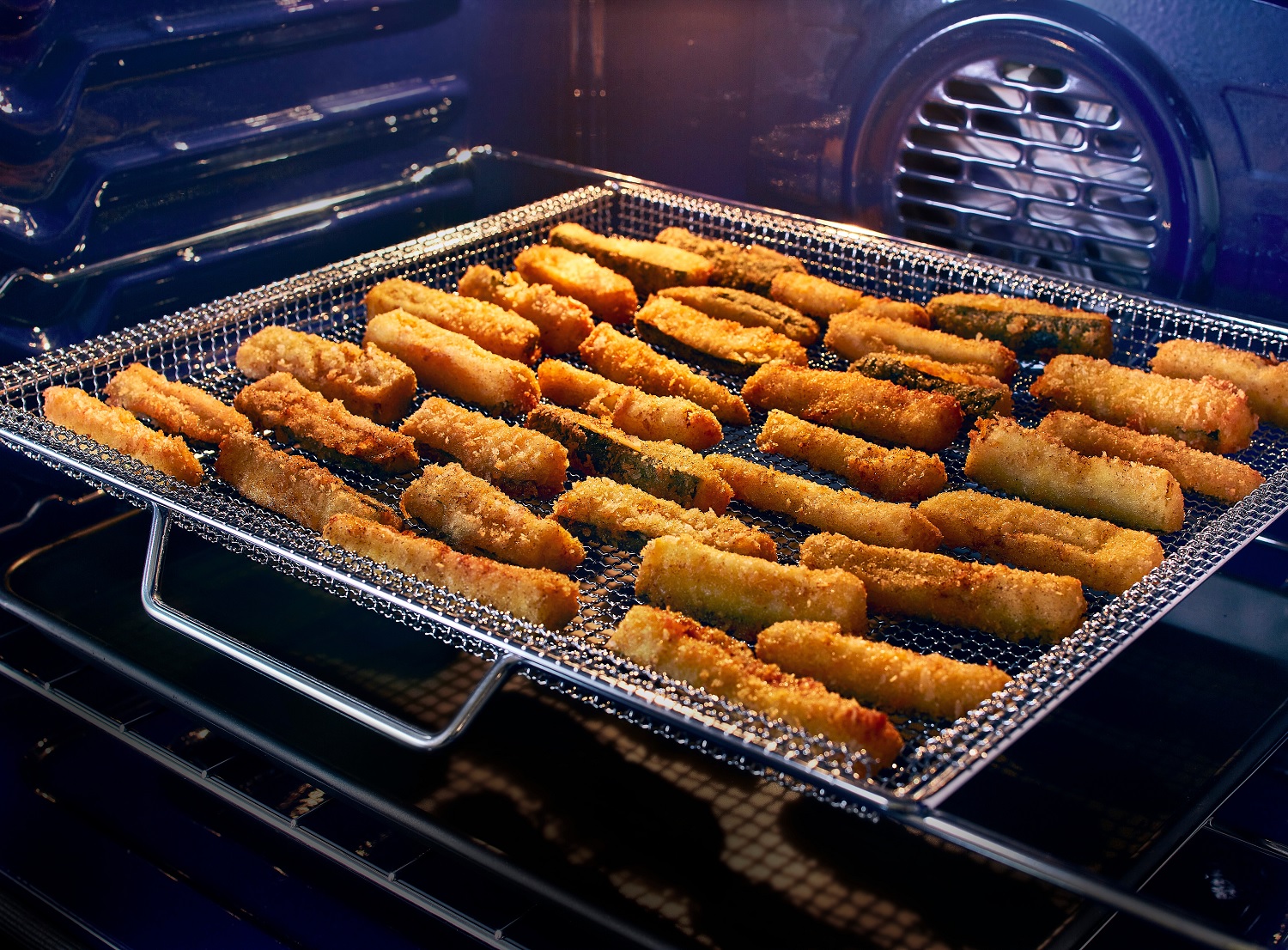 So, What is Convection, Then?

Before there was Air Fry, there was convection. Shaking up the culinary possibilities ever since they were manufactured for residential kitchens, convection wall ovens and ranges rely on a fan to circulate fresh hot air over, under, and all around your food, evenly distributing heat throughout the oven cavity.

Convection ovens are highly efficient, resulting in more evenly cooked foods being ready about 25 percent faster than a traditional bake. Most compellingly, thanks to the convection setting, your meals can retain their flavor without losing any natural juices or smoking out the nutrients during the baking process.

That said, it should be noted that there are distinctions between convection settings. With standard convection ovens, there is still a posterior fan that circulates heat, but the hot air is coming from the elements at the bottom of the cavity, just like in a traditional oven. Due to the heat rising from the bottom, a drawback of convection is that it struggles to bake multiple racks at once, so there may not be even results across the top, middle, and bottom racks. 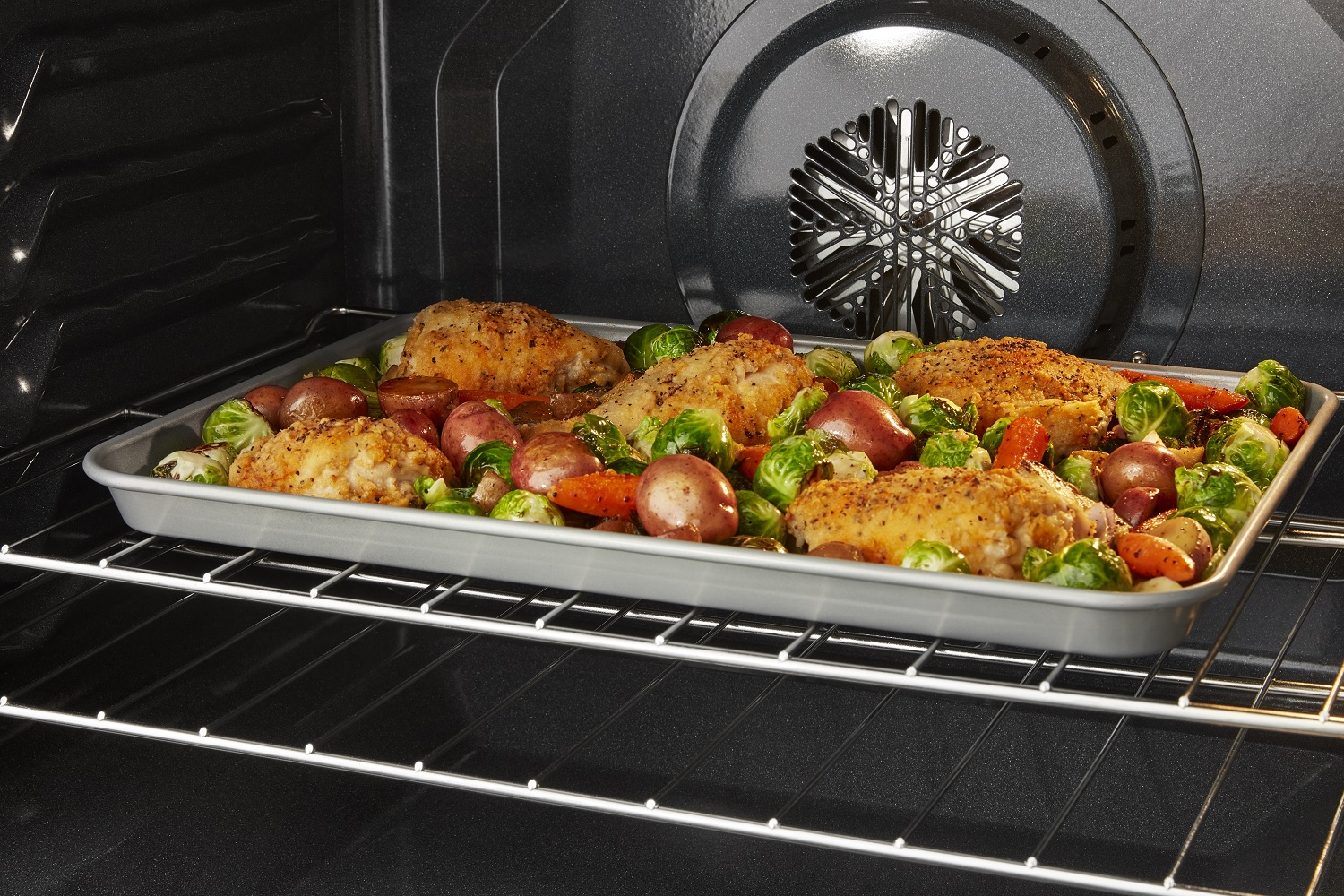 Okay, So What is the Difference?

Despite their similarly golden, crisp results, Air Fry differs from convection baking and vice versa. Their differences are mainly rooted in the speed at which the convection fans operate and the temperature of the oven. Compared to convection, Air Fry steps it up on both counts.

In terms of when you should use either setting, Air Fry is recommended for foods that cook with dry heat or that you would roast, bake, and fry. To list a few examples, pre-fried frozen foods, like chicken tenders, pizza rolls, and fish sticks, get appealingly crispy when baked with the Air Fry setting.

Pro tip: When using the Air Fry setting, use minimal oil to avoid soggy results. Lightly spray, using no more than 1 tablespoon of oil. Avocado, grapeseed, peanut, and extra-light olive oils achieve the crispiest results. Extra-virgin olive oil and other vegetable oils can cause food to dry up quickly and prevent them from getting crispy.

With a few exceptions, you can bake just about anything with the convection setting. Roasted meats thrive when heated in a convection oven, as the drier environment cooks them more thoroughly and brings out the spicy and herbal flavors of marinated skins.

If you’re covering up casseroles with a lid or a sheet of aluminum foil, the moisture loss associated with convection is not an issue, so you might as well use this setting to cook your entrées faster.

Most desserts get the green light, too, as convection heat creates steam faster to raise pie doughs and pastries—and don’t get us started on cookies. When you’re baking multiple batches, these ovens’ efficiency makes it easier to dole out dozens in record time. On the convection “no-no” list are custards, souffles, cakes, and breads, as these run the risk of baking unevenly, rising less impressively, and developing unpleasant crusts.

Related Article: What to Look for When Shopping for Ranges [2021 Range Buying Guide]

Because air frying and convection cooking both operate with increased heat being directed in a more encompassing manner, you may need to modify the temperature and cooking times for recipes of your favorite foods.

To bake a recipe using an Air Fry oven, reduce the temperature by 25 degrees and decrease the cook time by about 20 percent. To calculate the timing of the bake, multiply the cook time in minutes by 0.8. The resulting number is the estimated number of minutes it will take your Air Fry oven to churn out your fried food.

By contrast, there are two options you can try when using a convection setting. The first option is decreasing the cook time by about 25 percent (i.e., multiplying the listed time in minutes by 0.75) while retaining the oven temperature set forth by the recipe for a conventional oven.

The second option is to reduce the oven temperature by 25 degrees and abide by the cook time in the recipe. (If you ask us, the second convection option is generally preferred while the first option is an alternative for those who are cooking on a time crunch.)

For your convenience, we also provided a cheat sheet with approximate temperature and cook time conversions for popular entrées and desserts.

NOTE: Some Air Fry and convection ovens automatically lower the temperature by 25 degrees when either setting is in use. As such, we advise reading your user manual closely before converting oven temperatures for recipes.

There’s more than that came from! Check out our Appliances catalog to see how you can expand your culinary possibilities today. If you have any questions, don’t hesitate to call us at 1-414-476-1574 or visit our experts at any of our four Southeastern Wisconsin locations. More accessible than ever, we can also be reached via chat!